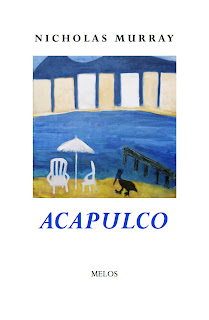 
Nicholas Murray was born in Liverpool and now lives in
Wales and London. He has written critically acclaimed
biographies of Bruce Chatwin, Matthew Arnold,
Andrew Marvell, Aldous Huxley, and Franz Kafka.
He has also published two novels, A Short Book about Love, and Remembering Carmen, and books on Victorian travellers, Liverpool and Bloomsbury. He runs the poetry imprint Rack Press and is a Fellow of the Welsh Academy.
Acapulco contains nearly thirty new poems and work
drawn from the earlier collections, Plausible Fictions and The Narrators. It concludes with the full text of Get Real!
a powerful verse satire on the coalition Government
which was performed by the Iris Theatre Company
at St Paul's Covent Garden in 2011.


“From the opening lines of 'Landscapes' we are in the company of a voice that quietly but compellingly makes itself heard... Throughout these poems, shadows, absences,and possibilities stalk the tyranny of mere fact...”

“Precise and rather mysterious poems”

“...his clear sense of internal rhythm and strong feeling for the well-honed phrase”