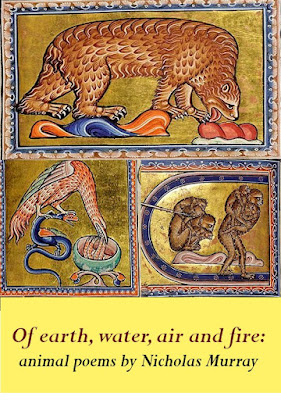 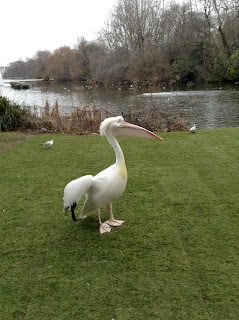 We know, and you know,
who's Boss and numero uno:
the guy who swaggers,
who Mick Jaggers.

Look at that bald coot.
hardly visible in the shoot;
hasn't a chance to shine,
to speak even one line,
pecking the dirt
in his black shirt,
while you just gloat
over that great pink throat,

and the enormous beak
which is the peak
attraction, igniting sparks
in the Royal Parks.
Like an 'S' hook
we follow the crook
of your distinctive shape
from webbed feet to nape
and that sexy tuft's
the sort of thing that Cruft's
would reward in a poodle.
You're a child's doodle.
This poem, Pelican, is from Nicholas Murray's new collection of funny, enchanting and moving poems about animals. Some were read at this year's Ledbury Poetry Festival to great acclaim.
Melos will be featuring the book and others at the Poetry Book Fair in September.


Posted by William Palmer at 09:43 No comments: