Posted by William Palmer at 09:46 No comments:

Rough Translation is a new collection by Cathy Galvin that explores through legend and memory, the natural world and personal emotion, the poet's roots in Ireland and their echoes in present day life in England. It is a worthy successor to Black and Blue, called by the Huffington Post, 'a perfectly formed masterclass in poetic risk-taking...'

Available now, post free, on the PayPal menu opposite
Posted by William Palmer at 09:48 No comments:

The Death of Wisdom Smith, Prince of Gypsies

is a new pamphlet by David Morley that will be launched in London in September.

A compelling sequence of poems narrates the death and funeral of Wisdom Smith, Prince of Gypsies (and friend of the poet, John Clare). A fusion of English and Romani brings to wonderful life the events, the feasting and mourning, of April 1839, when gypsies from all over the country converged on Rutland for the funeral of their Prince.

'He holds our world up to a language mostly kept secret; the refraction of the familiar is dizzying and often moving.' Les Murray

Earlier this year, David Morley won both the prestigious Ted Hughes Award for New Poetry and a Cholmondley Award for Poetry.

The new pamphlet can be ordered now, post free, by selecting it on the buy menu opposite.

Posted by William Palmer at 09:54 No comments: 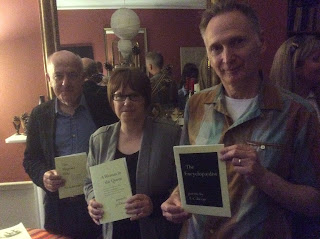 launching their collections on May 4th, at

Posted by William Palmer at 09:52 No comments:

THE ENCYLOPAEDIST
by A.C.Bevan
A WOMAN IN THE QUEUE
by Jo Dixon
THE MIGRANT SHIP
by Nicholas Murray

All three pamphlets are available to order now, post free, from the menu on the Buy Now button
Posted by William Palmer at 09:21 No comments:

...one of the first crop from Melos is The Secrets of the Sea by Nicholas Murray. The poems are often invigorated by all too human misprisions or incongruities: Brendan and his monks praying on their "small island" before "the whale lifts itself from seeming sleep"; intimations of romance in the fish market where "great crustaceans twitch" and "a salmon sleeps in a drift of ice".

Particularly impressive for its apparent simplicity, for the clarity and warmth of its voice, and for its abiding relevance and humanity, is Since by Ian Parks. In one poem, a euphoric paean to escape and to traditional England, a young man returns from a summer in a beach hut to the city and "the headlines I'd ignored". In another, the speaker recalls that his house was once the place where the bereaved registered the deaths of miners, "a drop of ink and scraping pen / reducing flesh and blood to dates and names".
Posted by William Palmer at 14:40 No comments: